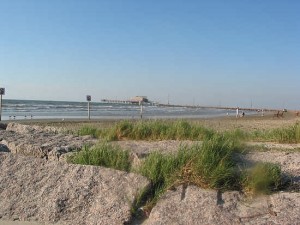 At least, not entirely. I didn’t make it in last week to blog–partly because my internet service was down for two days (no clue why, just couldn’t get anything) which threw everything off, and partly because I was working hard to get some pages written, which kinda distracted me from–well, pretty much everything. I didn’t even get out to the beach but twice. (There was lightning on Monday, so I didn’t go out.) (Here’s a picture of the beach where I usually walk, looking past one of the jetties toward the fishing pier–the blurry spots are due to water spots on the lens–sigh.)

I did get a pretty good set of pages written, though I didn’t make 30 because I blew it off on Friday. The boy and his dog and his girlfriend were coming down for a visit and I wanted to finish the cleaning I usually do in the afternoons after I write. Since our visitors were arriving around noon, I wanted to have a clean bathroom before they got here. (I generally clean only when I can’t stand it any more (and I have a much higher tolerance for dirt/clutter than the fella) or when company’s expected.) 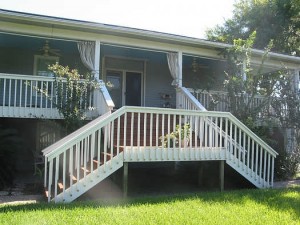 They arrived, we got my car out of the gate, locked the dog in the yard, and went out for shrimp po’boys, and then to buy the boy shoes and sandals. He’d worn out/ripped apart the old ones (the dog did not eat them–I saw them. No tooth marks). Then we came home and ate boiled shrimp (I got unsorted medium to large ones right off the boat–they’d had enough time to de-head them (I hate de-heading shrimp–I always get stabbed) and sort out all the little gumbo-sized shrimps, but not sort the great big ones from the not-so-big ones, so I got some really huge shrimp in my mix for a good price.) and learned that the girlfriend had never in her life peeled a shrimp. This was shocking, because she lives not too very far from us, and the good seafood is very available… So we taught her how to peel the suckers. They were very good. And I made my mushroom/onion/parmesan risotto casserole (you don’t have to stand over the stove stirring, but stick it in the oven to bake) to go with, and it was wonderful.

(The picture is of the house from the yard–which is actually on the side of the house–so you can get an idea of how big the yard is. And my big fabulous deck.) We had ice cream on the deck, and didn’t get too many mosquitos.

I have some more pictures of my island I was going to share, but I have to go iron my shirt and put on makeup, so I’ll go ahead and post this. I’ll try to get back in the next day or so and put up those other pictures.

This entry was posted in cooking, family, food, the beach, writing. Bookmark the permalink.

One Response to Not Goofing Off

Leave a Reply to Crazy Me Cancel reply