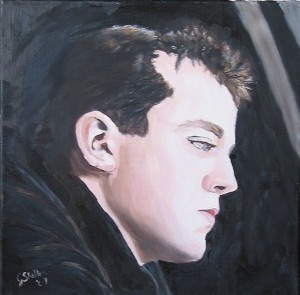 Okay, here’s the painting that made the cut, that will be in the show. In this light, you can see some of the brush strokes that don’t show in artificial light (I took it outside to photograph), but this is the painting. (Didn’t win a prize, but it’s in the show! Not bad for my first try ever.)

You can’t see the one that didn’t make it, because I haven’t taken its picture yet. Sorry. It’s a painting of three little boys playing at the beach. With sucky hands and feet. I could stick it on an easel and try to fix the hands and feet, and the arm that’s … just wrong. But I don’t think I will. It will just have to be wrong. (sigh) I still like it anyway.

Um. I’ve signed the contract, so it’s official. I have definitely sold three books to Tor. There. That’s my news of the day.

This entry was posted in New Blood, Old Spirits, painting. Bookmark the permalink.

2 Responses to My first Art Contest